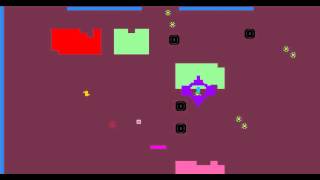 An Retro arcade-style hit for a new generation. Welcome to the colorful and dangerous world of 2x0ng!

2x0ng is an indie colorful arcade-action game with procedurally-generated puzzles and plenty of old-fashioned 8-bit enemies to smash. This critically-acclaimed American indie game is heavily inspired by Japanese game designs of the 70s and 80s.

2x0ng is an indie challenging action/puzzle game with procedurally generated levels. It is pronounced "TWO-zong", and is the sequel to David O'Toole's 2009 PC puzzler Xong.

At its core, this game is a mashup. 2x0ng's design is a nonlinear combination of several different late 70s/early 80s home video games, combining related aspects of each into something new. In 2x0ng, you move a guy around the screen and shoot at enemies in all directions, as in Berzerk. The ball you throw ricochets and comes back to you, like in Tron Deadly Discs. You break colored bricks with the ball, like in Breakout. You transfer colors from one place to another in order to complete the level, similar to Revenge Of The Beefsteak Tomatoes.

Like those games, 2x0ng's controls are limited to a single directional joystick and one fire button. This gives them a pick-up-and-play accessibility (2x0ng supports this with arrow keys and Shift key, as well as gamepad support.)

However, 2x0ng has a few modern twists.

The ball has some intelligence, and can ricochet between multiple enemies if they're near enough to each other. Lining up combo shots is crucial to survival when many enemies are closing in on you. The ball will also auto-seek back to you if it gets too far out of range or becomes stuck.

To reach the next level, you must successively unlock new areas by opening color-coded gates in the correct order. The levels are procedurally generated, so the game experience is different each time. Later levels are much larger than the screen, and feature substantially more moving/colliding objects than would have been possible in a real home video game from that era.

Also making a return from the original design: funky music! David has produced a bunch of new tracks exclusively for this game, as well as several bonus remixes of tracks from the original Xong. Music can also be deactivated, for using media players in the background while you play.

Greetings to my friends in Japan. I was born in the age of Space Invaders, and have always had a great appreciation for Japanese design. Some of my earliest gaming experiences were with the home console versions of Space Invaders, Pac-Man, and other arcade classics.

In creating 2x0ng I have tried to fuse these experiences together with what I've learned from Western indie action games, as well as from modern roguelikes. The result is a challenging and unique action/puzzle game that may trigger memories from past gaming ages. It gives me great pleasure to give something back to Japan, in the form of this free Japanese-language edition of 2x0ng, brought to you by PLAYISM. I hope you will love it!

David O'Toole is an independent game developer based in the US Northeast. Since 2008 he has released several well-received free independent games for the PC platform, the latest being "2x0ng".
Check more Games

by Shawn Beck
In Library
Processing

by NIGORO
In Library
Processing

Wyv and Keep: The Temple of the Lost Idol

by A Jolly Corpse
In Library
Processing

by Studio Pixel
In Library
Processing

by Loub.lat
In Library
Processing

by Montrezina
In Library
Processing

by Sakura Fubuki
In Library
Processing

by ZENITH BLUE
In Library
Processing

by Amanita Design
In Library
Processing

Medusa and Her Lover

by ship of EYLN
In Library
Processing

by ON
In Library
Processing

by Nerdy Bird
In Library
Processing

by Nyamyam
In Library
Processing

by MusMus
In Library
Processing