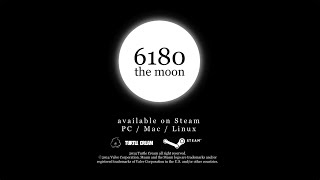 The Sun has gone so the Moon sets off on a journey to find the Sun.

Let's super high jump through the screen! 6180 the moon offers a fresh, unseen game play style, giving you the mechanic of delightfully long jumps and no fear of "slipping" to death.

You’re the Moon. You can jump extremely high through the screen. Please enjoy dynamic jumps in the simple space. Don’t hesitate! Think first, and move. The music will help you keep calm.

In addition to the unique gameplay, 6180 the moon delivers a unique storyline. The Sun has gone. The Moon sets off on a journey to find the Sun. Along the journey will be hazardous courses and deep realizations.

Let's super high jump through the screen! 6180 the moon is an indie platformer game with a unique mechanic. It offers a fresh, unseen game play style by connecting the top and bottom of the screen. This gives you the mechanic of delightfully long jumps and no fear of "slipping" to death.

http://www.turtle-cream.com/
Turtle Cream is a game dev studio based in Seoul, South Korea. It started out in 2009 at Sogang Univ. Game Education Center as a student developer project, and now the team is composed of two members: Sun Park, the creative director, and Young-min Park, the programmer. Turtle Cream's motto is to create “small but unique games” and is continuous presenting games with fresh game mechanics. They have released two commercial and four freeware games so far. In 2010, Turtle Cream was awarded Best Game in IGF China, which is an indie game award based in Asia-Pacific. In addition, Turtle Cream has continued to participate in many game conferences and conventions abroad, including GDC, IndieCade, and the Tokyo Game Show.
Check more Games

by Turtle Cream
$ 5.99
In Library
Processing