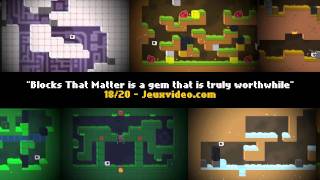 You gotta take matter and make it matter.

When indie game developers are in trouble, their only hope comes from their creation. Drill blocks of matter and recycle them to save the day!

When indie game developers Alexey and Markus are in trouble, their only hope comes from their creation. You are the Tetrobot: a tiny robot that can drill blocks of matter one by one, collect them, and recycle them into new pieces of 4 blocks. You also have the possibility to destroy lines of 8+ blocks in a very «retro russian» game style.

Sand, wood, stone, obsidian, iron, diamond: each matter has its specific behaviour you'll have to use wisely and take advantage of them. So get ready to use your brain and combine your platforming and puzzle-solving skills in this incredible mashup!

Blocks that Matter is the very first commercial indie game ever released by Swing Swing Submarine, our tiny game development studio based in southern France. We created it in 6 months, with a core team of 4 people: a programer, a level designer, a composer and a character designer.

Despite its cartoon graphics, Blocks That Matter is not an easy game, and you’ll have to use your brain a lot to solve puzzles, and sometimes your reflexes to run and jump quickly. But you can do it! Other players already did, so you can do it too!

As a reviewer wrote about it, Blocks That Matter is "a block game in love with block games". In fact, the entire game is about recycling blocks to then use them to move forward. That’s also why you’ll see references to other games in Blocks That Matter. We love those indie games, both the famous and the not-so-famous ones, and we took this occasion to let the world know how diverse and rich videogames, especially games made out of blocks, can be.

http://www.swingswingsubmarine.com/
Swing Swing Submarine is an independent game development company created by two young and silly French guys in 2009. Today, it’s a small team of people, united by passion, that brings unique games and interactive works to players all around the world.
Check more Games

Wyv and Keep: The Temple of the Lost Idol

by A Jolly Corpse
$ 14.99
In Library
Processing

by Amanita Design
$ 9.99
In Library
Processing

by Hanamushi
Free
In Library
Processing

by Sparpweed
$ 11.99
In Library
Processing

by I-Illusions
$ 9.99
In Library
Processing

by FullPowerSideAttack
$ 4.99
In Library
Processing