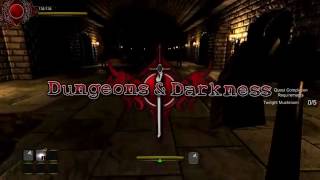 Enter unforgiving dungeons where many an adventurer has met with their end.

A first-person exploration and action RPG game. Make your way through monster and trap infested dungeons, uncover chests contained powerful weapons and armor, and slay the great evil that lurks deep in the shadows.

A first-person exploration and action RPG game.
Make your way through monster and trap infested dungeons, uncover chests contained powerful weapons and armor, and slay the great evil that lurks deep in the shadows.

This world is full of misfortune...
Countries do battle, people kill and steal, the poor suffer.

Stories began to spread amongst the people.

The stories told of several dungeons in this world.
That within their depths, lives a calamitous evil.
An evil energy that darkens hearts and will bring ruin to this land.

Warriors have delved into the dungeons, seeking its darkest secrets.
One seeks to destroy the evil and bring peace to this land.
Another looks for lost treasures, seeking only his own wealth.
And yet another...

The existence of several impregnable dungeons of old became known throughout the land, attracting people, goods and commerce.
Naturally this led to the creation of a town - one of prosperity and stability.
But the town that exists now speaks of a warped and troubled world.

It has withstood many disasters and longs for peace to return to this world...

It is with this same wish that you set foot into the town.

Nostalgic, yet new...
Enter unforgiving dungeons where many an adventurer has met with their end.We expect you are already very familiar with dungeon RPGs by now, right?
We felt that this genre needed to be brought to the next level, with real time action that was difficult to achieve with the hardware specs of the previous generation.
Please enjoy our new dungeon RPG adventure!

http://yproject.sakura.ne.jp/
Yamiuchi Project is the game developer team who appears on Comiket to sell the Dojin games. Our motto is to "create it if you cannot find it in the market!"
Check more Games

by peakvox
$ 1.99
In Library
Processing

by Suxa (suxamethonium)
$ 9.99
In Library
Processing

by Edelweiss
$ 19.99
In Library
Processing

by Lets Get Kraken
$ 11.99
In Library
Processing

by Bombservice
$ 2.99
In Library
Processing

by Bluffman
$ 9.99
In Library
Processing