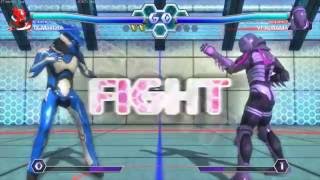 The Creator's Edition of EF-12 includes both the EF-12 game as well as all the tutorial documentation to make your own content.

EF-12 is a playable 3D fighting game right from the moment you install it. Developed by Quad Arrow and designed by industry veteran Masahiro Onoguchi, EF-12 is the ultimate convergence of 3D fighting and game modification.

All the instructions are available inside "Documents" folder of the downloaded file.

We permit the usage of EF-12 for the commercial use. We don't ask any revenue share for your own game created from our EF-12 development kit. Feel free to create an original indie fighting game. (We'll be glad if you can contact us before or after your development!)
Please read below about the commecial use. Policy about commercial use | Project [ EF-12 ] (English one is available in the bottom of the page) Also the same pdf file is available inside "Documents" folder within the downloaded file.

Default Characters are all renewed!

Each characters basic special moves are introduced in the "Command_list.pdf" in the "Documents" folder of your installed directory.
It doesn't have the info for Bosses nor basic movements, so if you want to find them out, please check the files inside each character's folder.
To edit the movements, please see the guide below;
- (Under construction)

You might noticed there are couple characters in PV, screenshots or this store description are not included in the current build.
The reason is, EF-12 is not just a game but a "Fighting Game Maker", so you need to import them into the game to create your own EF-12!
Once you get used to it, you'll be able to modify the character's stats, game system or anything else soon!

To download or import other characters or stages, please see the guide below;
Creative 101 - How to add characters/ stages/ UIs
Additional contents

If you have any questions, please ask us in the forum.
Questions about EF-12

You can find any other guides from below;
http://steamcommunity.com/app/263600/guides/
We'll keep updating it. Stay tuned!

With this major update, we have not only added the arcade mode, but also some essential elements for the versus mode are included too. Now we have the graphical effects for the character select screen transition or the ending credit after completing the arcade mode.

Of course, all the elements introduced above is absolutely editable!
Which character appears as enemies for the arcade mode, the difficulty or anything. We are planning to add the "random character" feature in the future update.
Also we are waiting for your song for our ending since the current one is just a temporary but we don't have enough budget to create the special song. We cannot offer you the reward, but we'll be very glad if you can help us!
Please contact us via Twitter, website or forum.

In cooperation with the LA-MULANA 2 KickStarter Project, Quad Arrow has created an official, full-featured, TK-type Lemeza Kosugi character for EF-12! Download it for free and take him into the ring!

Every element of EF-12 is modifiable, replacable, and easily installed. Whether you're a complete newbie to the modding scene, or a grizzled veteran, EF-12 has everything you need to make what you want.

Those seasoned in model creation and animation can simply create assets in what ever program they're most comfortable with, easily check the requirements within the manual interface, and import their creations directly into the game with minimal fuss!

For those still learning, EF-12 comes with a full suite of tutorials that can teach players how to create their own content for the game, no matter their skill level. Get ready, because school is in session!

No interest in creating your own characters or stages, but still want to see what EF-12 has to offer? Importing other people's creations is as easy as placing the files in the right folder, and starting EF-12. No complicated installation or programming knowledge is required to get EF-12 content running!

Want to see if your character is ready for primetime without loading up EF-12? Use the included Fool Viewer to see exactly how your character will appear in-game, complete with animation and applied graphical effects.

With EF-12, the only guess work is knowing what move your opponent will use next!

The reason I started this project, over 10 years ago now, was a meeting I had with Hiroshi Inukai, an e-sports director.

He was working hard to promote the enjoyment of video games in an e-sports setting, which wasn't done so much back then, from the position of a producer. Seeing that, I thought "Well, I best make some content specifically for e-sports!"

In the last 10 years I've scrapped this indie project twice. It wasn't until my third attempt that I created what is now known as EF-12.

Video games are, in comparison to other mediums, not held in very high regard by society. A player who took home a prestigious prize from a large e-sports event is unlikely to receive any sort of attention from society at large.

I think the fact many think of video games merely as time-wasters, or nothing more than a tool for companies to make money is a major reason for this.

Shogi, or Japanese chess, started out in much the same way - as nothing more than a simple game. However, its pioneers worked hard to promote it, and now players are respected in society.

I believe for video games to achieve a similar level of respect, there are two important things:

EF-12 was developed with rule 1 as it's primary goal. I believe rule 2 has also been achieved.

I am very much looking forward to the day when users can join me in keeping both of these rules alive. Until then, I will keep working on EF-12 by myself.

http://ef-12.com/
Quad Arrow Future Links is the brain child of gaming industry veteran Masahiro Onoguchi, who made a name for himself working on some of the world's most famous fighting games as an animator. Now more interested in creating a tool to put power in the hands of the player, Onoguchi and Quad Arrow are continually improving and expanding the genre-defining 3D fighting game engine EF-12.
Check more Games

by Samurai Punk
$ 14.99
In Library
Processing

by Chromatic Dream
$ 3.99
In Library
Processing

by Mercury Studio
$ 14.99
In Library
Processing

by ZENITH BLUE
$ 9.99
In Library
Processing

by Fly System
$ 9.99
In Library
Processing