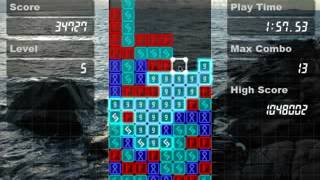 The first version was created in the summer of 2005.
At first I developed and created a competitive tile-matching puzzle game.

Time passed and in 2008, my final year as a university student, I received a proposal from Fuyu Komi to bring back and remake the Howitzer I created in the past.

In those 3 years I played LUMINES and the free software Irisu Syndrome!, and came to realize what was wrong.

Those titles mainly designed for single play.
Puzzle games are not competitive win/lose games.
I shifted the game design so that the game play itself fun, and would make the player’s mind flow endlessly with brain stew.

Howitzer was changed and created with the focus shifted towards “single player”, “easy to obtain maximum chains”, and an “endless flow of brain stew”.

If the autumn of 2009 close to 100 people played the game at IGDA’s Akihabara Location Test Game Show and the game rules were further revised after the problematic points came out in the wash.

In the summer of 2010 the final version of Howitzer was released.
Even though it only contains about 3,000 lines of source, it took 5 years from conception to complete, and 2 years to develop.

In addition, I had planned to write the prototype with Python and create the release version with C++, but I developed it to the end with Python.

http://uecgod.jp/blog/
I learned programming with Carnage Heart, and I came to know the joys of game development with HSP. The next thing I knew I was writing image management with C and developing semiconductor based survey instruments with C++. In my between time I worked at a research laboratory for a telecommunications enterprise that disassembled malware that writes PHP and VBA. I currently work leisurely at Ruby writing with Python.
Check more Games

by Montrezina
$ 9.99
In Library
Processing

by Shindenken
$ 4.99
In Library
Processing

by PlatineDispositif
$ 7.49
In Library
Processing

by Amanita Design
$ 4.99
In Library
Processing

by I-Illusions
$ 9.99
In Library
Processing

by Sparpweed
$ 11.99
In Library
Processing