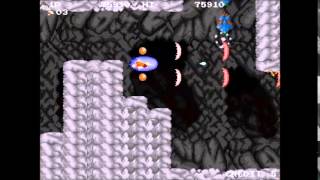 Retro-styled side scrolling shooting for a new generation!

Defeat the evil Argus invasion and save the Infinos civilization in this retro-styled side scrolling shooter.

Styled after side scrolling shoot-em-ups of the 80's, Infinos uses classic sprite artwork and frenetically paced shooting action to test the skills of even the most seasoned players.

Without any screen-clearing bombs to save you from sticky situations, you'll have to rely on your laser shooting bits, power-ups, and quick thinking to avoid enemy fire and live to tell the tale of the world's end.

A DESPERATE GALACTIC STRUGGLE TO SAVE CIVILIZATION

The planet “Infinos” is home to an advance civilization. Having stepped into the foray of space travel, the planet’s population funneled all of their technological resources into space development.

But a dark future lay ahead for the people of Infinos, for a great tragedy loomed on the horizon.

The space colony under construction that was to become a second home to the people of Infinos went haywire. The people of infinos, seeking an answer, were soon confronted with the terrible truth; this was the doing of invaders from beyond

An emergency investigation revealed the identity of the invaders to be the alien race known as the “Argus.” The people of Infinos took to space to wage war at once, but the repeated invasions carried out by the military of Argus brought the military of Infinos to its knees.

With their backs against the wall, the military of Infinos decided to pool all of their remaining technological resources into a single spaceship. The blood and sweat of all the people of Infinos went into the creation of their last line of hope, “Foria.” Foria was then to face off, alone, against an enemy of overwhelming military might.

As an avid shoot ‘em up fan myself, I just wanted to “created the indie game I always wanted to play.” If the keywords “terrain,” “non-bullet-hell,” and “patternized” ring a bell, then this game might be for you. The game is meant to bring about a sense of nostalgia, and if anyone who frequented arcades in the 80s is reminded of those games by playing this one, that’d really make my day.

by Picorinne Soft
$ 6.99
In Library
Processing

by Dong
Free
In Library
Processing

Inside a Star-Filled Sky

by MixedBag
$ 9.99
In Library
Processing

by Tribute Games
$ 19.99
In Library
Processing

by peakvox
$ 1.99
In Library
Processing

by GMJ Licensing
$ 6.99
In Library
Processing