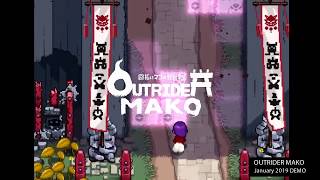 Take on the role of Mako on her quest to seek out and subsequently deliver her, uh, deliverables in this top-down view 2D action game.

Jump on top of your enemies and slime them with goo to stop them in their tracks! Get those deliverables delivered!

Take on the role of Mako on her quest to seek out and subsequently deliver her, uh, deliverables in this top-down view 2D action game.

In accordance with a deal made with self-proclaimed "delivery service" and all-around mysterious entity known as Bumon, Mako has taken a job working as a lackey at the Bumon Delivery Corporation in "Mayoi" - the world of the gods.

She was told that if she finishes up her assigned tasks and collects the stamps of approval for her various deliveries, then she'll be able to return to her own world, but... Get to work finding and collecting the various items requested in Mayoi.

As soon as you've gathered the items, bring them to the workbench. Once you're finished packaging them, deliver them to the client. Rinse, repeat, and keep on going to see just how the story unfolds. Outrider Mako features a fun little gimmick in which you can jump on top of your enemies and slime them with goo to stop them in their tracks. Also, the pixel artwork is chock full of Japanese-style goodness.

Get ready to jump into battle, solve some mysteries, and take on a bunch of collection quests as you traverse the world of Mayoi! Clear your various requests to receive "Heaven's Blessing" from the gods, making your journey extra-awesome!

by Krystian Majewski
$ 4.99
In Library
Processing