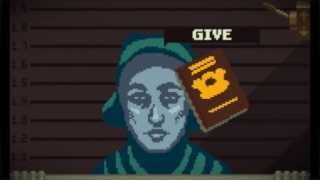 Are you ready for your new job?

Take on the role of an immigration inspector at the border of a country full of political intrigue and danger.

TAKE ON THE ROLE OF AN IMMIGRATION INSPECTOR AT THE BORDER OF A COUNTRY FULL OF POLITICAL INTRIGUE AND DANGER.

The communist state of Arstotzka has just ended a 6-year war with neighboring Kolechia and reclaimed its rightful half of the border town, Grestin. Your job as immigration inspector is to control the flow of people entering the Arstotzkan side of Grestin from Kolechia.

Among the throngs of immigrants and visitors looking for work are hidden smugglers, spies, and terrorists. Using only the documents provided by travelers and the Ministry of Admission's primitive inspect, search, and fingerprint systems you must decide who can enter Arstotzka and who will be turned away or arrested.

"Papers, Please" is my attempt to capture the challenge of performing a difficult and sometimes tedious job under the constant threat of unknown dangers.

http://papersplea.se/
Lucas Pope is a long-time game developer with experience at both small and large studios. He established Ratloop, Inc. together with friends to create PC games and later moved to Naughty Dog to work as a programmer on the Uncharted 1 and 2 games for Playstation 3. Now as an independent developer he focuses on shorter, more experimental games. Together with his wife, Keiko Pope, he developed "Mightier" for PC in 2008 and "Helsing's Fire" for iOS devices in 2010. His most recent game, "Papers, Please", was released for PC and Mac in 2013.
Check more Games

by MidBoss
$ 3.99
In Library
Processing

by HZ3 Software
$ 4.99
In Library
Processing

by Mårten Jonsson
In Library
Processing

by Sam Barlow
$ 5.99
In Library
Processing

by Geeta Games
$ 9.99
In Library
Processing

by tomeapp
$ 9.99
In Library
Processing

by Mårten Jonsson
$ 2.99
In Library
Processing

The Silver Case: The Extra Contents

by GRASSHOPPER
$ 14.99
In Library
Processing

by KIKIYAMA
Free
In Library
Processing

by Bluffman
$ 9.99
In Library
Processing
DLC

This War of Mine: Stories - The Last Broadcast (ep. 2)