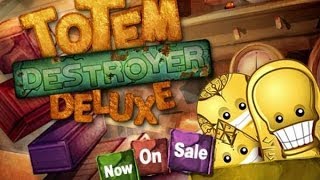 Totem Destroyer is back! Now bigger than ever!

Don't let the idols touch the ground or they'll be destroyed!
Adapt to the reactive, physics-based environments and make use of the unique totems you come across to reach each goal.
Collect orbs within the various levels to unlock custom skins, wallpapers, and beautiful original music.Master all mind bending puzzles and become a Totem Destroyer champion!

In 2008, Gabs made and launched Totem Destroyer (TD).At that time, TD had new and different gameplay compared to other web browser puzzle games and won the “Best Puzzle Game” Prize at 2009 Flash Game Awards (The Mochis).

Totem Destroyer (2008) became pretty popular by that time.
The game received a good amount of loyal fans and it was really nice to see that a lot of people were playing it each day. The downside was the large number of rip-offs that came some months later but that happens with many games. The thing about rip-offs is that they make you want to do better if you're planning to make a sequel (you need to stand out from their tiki game).

Totem Destroyer Deluxe was our concept for this franchise.
It was meant to be Totem Destroyer HD but simply adding “HD” to the title sounded like the same game with improved graphics.
For TDD, we wanted to keep the player interaction simple as the previous games were and added new mechanics to the game.
We decided to put more effort on the game physics.

We created new blocks with different physics properties, forcing the player to think in different ways to match the puzzle's difficulty.
We implemented new platforms and walls with new mechanical features that don't always remain static, much as they did in the previous games.

To create the new blocks and platforms, we tried to incorporate ordinary objects from everyday life.
We also referenced old cartoon traps and contraptions from Tom & Jerry and Road Runner that never worked. (but they work on our game)
That’s why TDD has blocks and platforms with funny or weird behaviors.

The art direction is changing, too, (for better).
We had to keep the TD art style but, at the same time, we couldn’t make more of the same stuff. We decided to make some idol sketches to try and capture the feel of the other TD games. It was a challenge to do something different but similar, without looking like a ripoff.

Because TDD is an HD game, the concept art had to follow the same idea and yet be more detailed. We tried to add more irreverence to the scenarios (including some small animations in the background) and to the redesigned golden idols.

TD and TD 2 were launched on big game portals, free for all.
For TDD we wanted a different, bigger approach. The first desktop version had 50 levels and now we are working on a more complete game with 75 levels and new types of blocks and platforms. The previous games from this franchise were developed in Adobe Flash.

TDD is being developed in Unity 3 for the ease of porting to other platforms and also for performance sake, which is very important for this game, considering the new physics behavior and graphics capacity.

Cats in the SkyDeveloper's Voice

Cats in the Sky

http://www.catsinthesky.com/
A small game studio that started on a three friends stake. Yes, we make games. Why do we make 'em? Because games are fun and, like everyone else, we like fun. So there's nothing better than having fun while we work.We don't have an ambition like "to be the world's biggest game developer company". Instead, we want (upon everything) to feel pretty much pleased on creating, projecting and producing our games, taking care of every detail.
Check more Games

by Shindenken
$ 9.99
In Library
Processing

by State Of Play Games
$ 6.99
In Library
Processing

by Montrezina
$ 9.99
In Library
Processing

by Shindenken
$ 4.99
In Library
Processing

by Amanita Design
$ 19.99
In Library
Processing