The Next Chapter Of Pink! 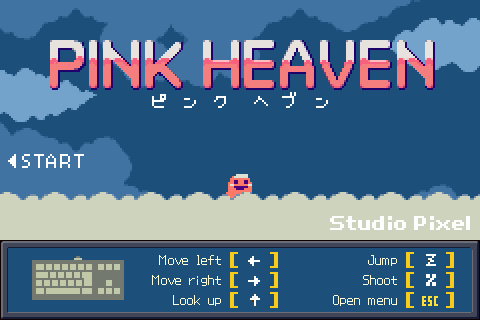 Hopefully you're following Playism's amazing Twitter feed. Besides being a stream of friendly communication and sales alerts, it's also where we bring news that's so fresh it's liable to swim away if we don't hold on tightly. It's where we've been putting up pictures of our upcoming project, Lost Technology, it's where we confirmed our publication of Band Saga, and it's where we'll carefully detail our plans for world domination (in 140 characters or less).

It's also where we've been teasing the trailer for Pink Heaven, the out-of-left-field follow up to Pink Hour. If you've never gotten a chance to play, by all means, go and pick it up. Pink Hour is a pre-cursor to Kero Blaster and puts you in the roll of Pink, the plucky secretary to Kero's boss, who must go on an adventure to get some important lost documents. It basically exists to give people a great idea of what playing Kero Blaster will be like without forcing you to run a demo of something you'll eventually play in the full version of the game. A brilliant idea, Pink Hour has seen hundreds of downloads, and it's easy to see why. It's fun, it's cute, and it's free!

By the same token, Pink Heaven is ALSO free and it's a totally different adventure for Pink. This works for just about everyone. If you enjoyed the first Pink Hour, you'll have a blast with Pink Heaven. If you bought Kero Blaster, this is more of the same but not a repeat in any way! If you hate free games and despise cool pixel art with tight controls, I just have no idea what to tell you. Maybe consider getting a sandwich, those work for everyone.

Pink Heaven, for those who'd like to know, is a huge step up from the original Pink Hour. The content is 100% new and actually has a bit of re-playability. Without getting into it too much, Pink is off on a completely different adventure, and this time the choices that you make will affect the outcome. Vague, I know, but it's the best I can do, sorry! The office is, naturally, divided on the best way to control Pink. Some say the keyboard is a perfect fit, with others arguing that a controller is the only way to fly. There are whispered rumors that a classic NES-style controller is the best, though that may just be the sharp corners that keep you alert during the gameplay.

There's just one thing, though. The original Pink Hour was meant to be a trailer/teaser for Kero Blaster prior to it coming out. It was successful, and now tons of people around the world love Kero Blaster. So why, then, is Pixel making this new Pink Heaven? What on Earth could he be promoting? 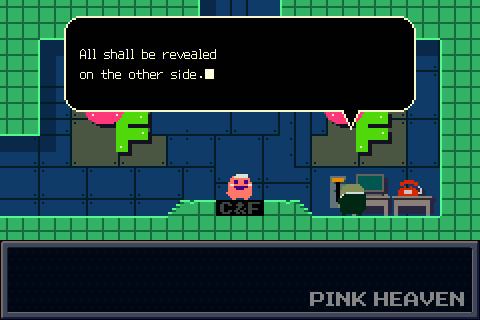 I hate to say it, but you'll have to stay tuned: all will soon be revealed...