We have kept you waiting for a very long time since Kero Blaster appeared at PlayStation Experience in 2016. But we can finally announce that Kero Blaster will be heading to PlayStation 4 on April 11 2017 worldwide. 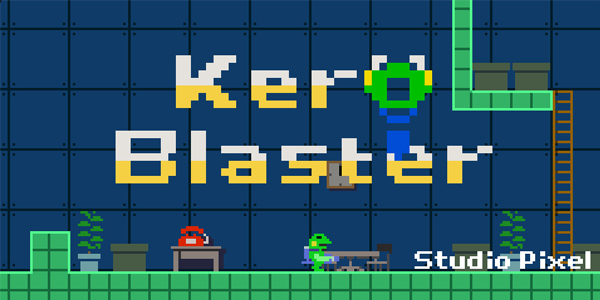 The PC and iOS version of Kero Blaster, which is now available in not only English and Japanese, but also French, Italian, German, Spanish, Brazilian Portuguese, Russian, Chinese (Simplified), will be heading towards PlayStation 4 next month.

In the world of Kero Blaster, there are no humans, but rather animals, frogs, cats and other creatures, have taken over the roles that humans would usually play. The cast of Kero Blaster work in a company called “Cat & Frog Company”, where the standard office duties drive their lives forwards such as working overtime, going on a hot spring trip, watching TV or appearing on a TV broadcast.

The main character of Kero Blaster is a bipedal office worker frog. He is busy doing some “bug removal” at Cat & Frog Company.

While he is doing his job, he battles unique monsters while also acquiring various weapons and equipment that allow him to jump higher, or let him adventure through the unknown terrain of his business trip. Clear the stage in this action game.

If you clear the normal mode in Kero Blaster, you will rewarded with a second chance to run through to get hidden weapons, as well as unlocking the “zangyou mode”, based on the Japanese word for "overtime". Also, a boss rush mode and trophies are being implemented.

For those of you who love frogs, and even for those who don’t, please take a chance at working for Cat & Frog Company in Kero Blaster on PS4!